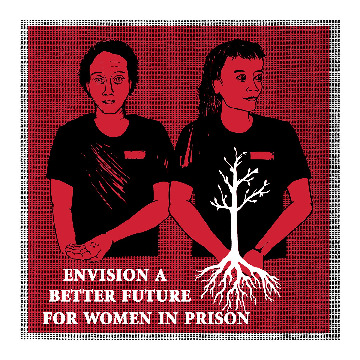 Women in Prison by Lydia Crumbley from the portfolio Voices From Outside: Artists Against the Prison Industrial Complex produced by Justseeds and Critical Resistance, 2008. Image retrieved from justseeds.org"

There are few more iconic figures in the history of Black freedom struggles than Angela Davis, but a new generation of organizers inside and outside of prison walls was introduced to her uncompromising vision of freedom and Black feminism when she co-founded the first abolitionist organization, Critical Resistance, in 1997. Davis’ work as a scholar-activist provides a useful lens to understand the rise of mass incarceration and what she influentially labeled the “prison industrial complex,'' initially defined as the profitability of the growing public and private prison system for corporations. As her comrade Ruth Wilson Gilmore argues, “Capitalism requires inequality, and racism enshrines it.” Critical Resistance expanded on this definition, emphasizing how the PIC collects and maintains both profit and the power of elites. The PIC abolitionist movement strives to dismantle both systems of policing and prisons and the conditions that make prisons and punishment seem like necessary and appropriate solutions to social, economic, and political problems. Confronting and abolishing the power relations embodied in PIC required a Black feminist approach that addressed the interwoven nature of state violence and people’s struggles.

Davis’ Black feminist theory took shape in the everyday work of organizations like the Santa Cruz Women’s Prison Project and the California Coalition for Women Prisoners, which helped the voices and experiences of incarcerated women break through prison walls. Rejecting the machismo that characterized earlier prison struggles, women and their allies revealed the gendered violence and trauma both led marginalized women to prison and was exacerbated by state violence. As Californian prisons became infamously overcrowded, incarcerated people faced medical neglect and abuse even more extreme than the conditions described at Soledad years earlier. All these circumstances and the will of incarcerated women to struggle for their own survival built a new inside outside movement that continues to this day.