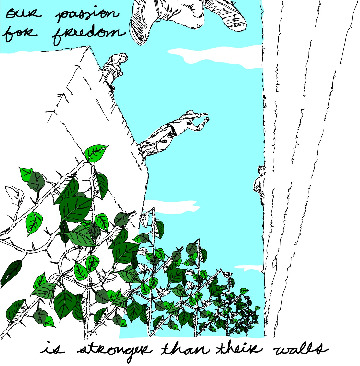 Our Passion by the Amor y Resistencia Collective from the portfolio Voices From Outside: Artists Against the Prison Industrial Complex produced by Justseeds and Critical Resistance, 2008. Image retrieved from justseeds.org

Prisons became a focal point of revolutionary organizing at the height of the Black Power movement, as countless Black people and their allies joined the struggle to free Huey Newton, the Soledad Brothers, Angela Davis, and all political prisoners. Incarcerated revolutionaries exposed horrific prison conditions and galvanized the movement for Black liberation in the prisons and the streets. George Jackson is both an iconic and paradigmatic figure, whose revolutionary analysis of the structural racism and dehumanization of prisons resonated deeply inside and outside of prison walls. Jackson, Davis, and their contemporaries were guerilla intellectuals who forced liberatory theory from their own experiences of oppression and shared the wealth of global revolutionary thought with their peers. The ultimately deadly repression Jackson and his brother faced were consequences of the extreme violence of the California justice system, from the unfair sentencing practices that forced him to serve life in prison for a petty crime to the brutal repression of Black organizers. Even after Jackson’s own death, the struggle for adequate medical care and living conditions, an end to unpaid slave labor, the right to organize, and freedom itself ignited rebellions across the “prison nation” from Folsom to Attica. Tragically, state officials remained vehemently opposed to human rights and responded with characteristic violence and repression. The patterns of structural racism that defined the lives of the Soledad Brothers would come to fruition in the era of mass incarceration, as the California prison population skyrocketed and the state gained its infamous status as the carceral capital of the nation. Yet even in the darkest moments, the steadfast bravery and determination of incarcerated people to organize for survival and the solidarity of their allies in the free world made change possible.