On January 13, 1970,  three days before George Jackson, Fleeta Drumgo and John Cluchette were falsely accused of murdering white prison guard John Mills, white prison guard Opie G. Miller shot three outspoken Black men, including Jackson’s friend January W.L Nolen, a prison boxer and tutor, Cleavland Edwards, and Alvin Miller. In the aftermath of the killings, incarcerated African Americans demanded answers. As a race war raged on behind Soledad’s walls, someone threw guard John Mills off the third level of the prison. Jackson became the primary suspect  because of his well known revolutionary politics and affiliation with the Black Panther party. Inparticular, Jackson was known for organizing against the racial segregation of prison facilities. Chuchette, age 24, and Drumgo, age 23, were also targeted for their political opinions, as apparently evidenced by the posters Drumgo kept in his cell and both men’s Afro hairstyles. The three barely knew each other when they were accused, but they were thereafter to become known as the “Soledad Brothers”. 1  From left to right, Drumgo, Jackson, and Chuchette are pictured. The first two photos are from 10/26/ 1970 in San Quentin State Prison.

Davis quickly became a leader of the campaign to free the Brothers. She was already a prominent public figure due to then California Governor Ronald Reagan’s crusade to fire her from her position as a Philosophy professor at UCLA because of her membership in the Communist Party. Davis grew up in the Dynamite Hill neighborhood of Birmingham, Alabama, which was infamous for repeated white supremacist bombings. This experience informed her perspective on the accusations of violence leveled against Jackson and the Black Panthers, centering the violence of structural racism, the prison industrial complex, and misogyny, rather than the self defense of marginalized people. As she wrote in the first issue of The Black Scholar in April 1971,  “Under the surface of the murder indictment lurked the real charges: revolutionary insubordination, failure to conform to the established order of things, inciting dissent, planting the seeds of liberation in the minds of their comrades in captivity.” 2 .

Davis (center front) is pictured here at a June 19th 1970 rally to free the Brothers next to Jonathan Jackson. Jonathan was her close friend and bodyguard before his untimely death. 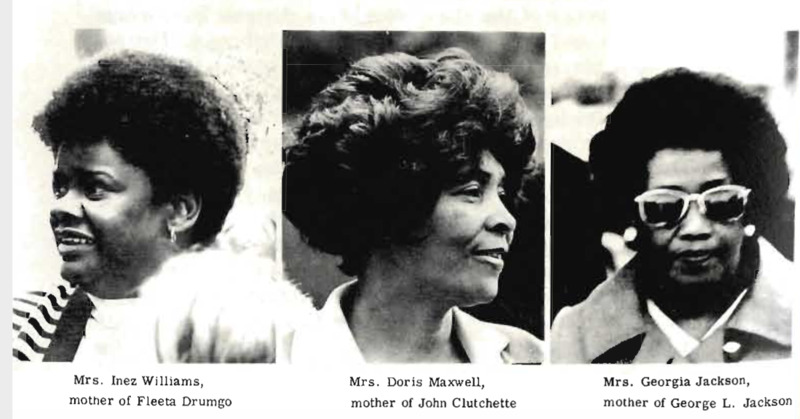 This 1970 photograph of the Mothers of the three men is taken from the Soledad Brothers Defense Fund’s 1970 pamphlet. The pamphlet was intended to educate community members about the case, but it also serves as evidence of the often forgotten roles played by women and family members in struggles for freedom. Photo from Soledad Brothers Newsletter courtesy of Freedom Archives

← Black Power and Prison Struggles
Studying to Struggle: Jackson as a Guerilla Intellectual →
The Soledad Brothers