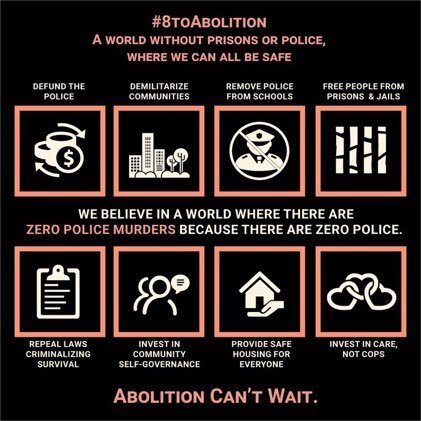 A graphic mimicking the visual style of the police reform 8 Can't Wait campaign but putting forward abolitionist demands from the 8 to Abolition collective. Courtesy of 8 to Abolition. 6/07/2020

In the wake of the cold-blooded murder of George Floyd by the Minneapolis police, Black youth and their allies around the world refused to wait for justice from a system responsible for their oppression. Fueled by grief and rage, they took to the streets and set fire to police stations to build a world where Black lives matter in their ashes. Both local police forces and the national guard sent to reinforce them responded with indiscriminate violence and brutality, proving the demonstrators' accusations correct. Protestors’ successful demands to defund the police are part of a long lineage of revolutionary Black freedom struggles, particularly the struggles of incarcerated people for their own freedom, dignity and survival. The abolitionist movement strives to dismantle both systems of policing and prisons and the conditions that make prisons and punishment seem like necessary and appropriate solutions to social, economic, and political problems.As abolitionist theorist and former political prisoner Angela Davis commented in a recent interview, “Defunding the police is not simply about withdrawing funding for law enforcement and doing nothing else...It’s about shifting public funds to new services and new institutions — mental health counselors, who can respond to people who are in crisis without arms. It’s about shifting funding to education, to housing, to recreation. All of these things help to create security and safety. It’s about learning that safety, safeguarded by violence, is not really safety.” 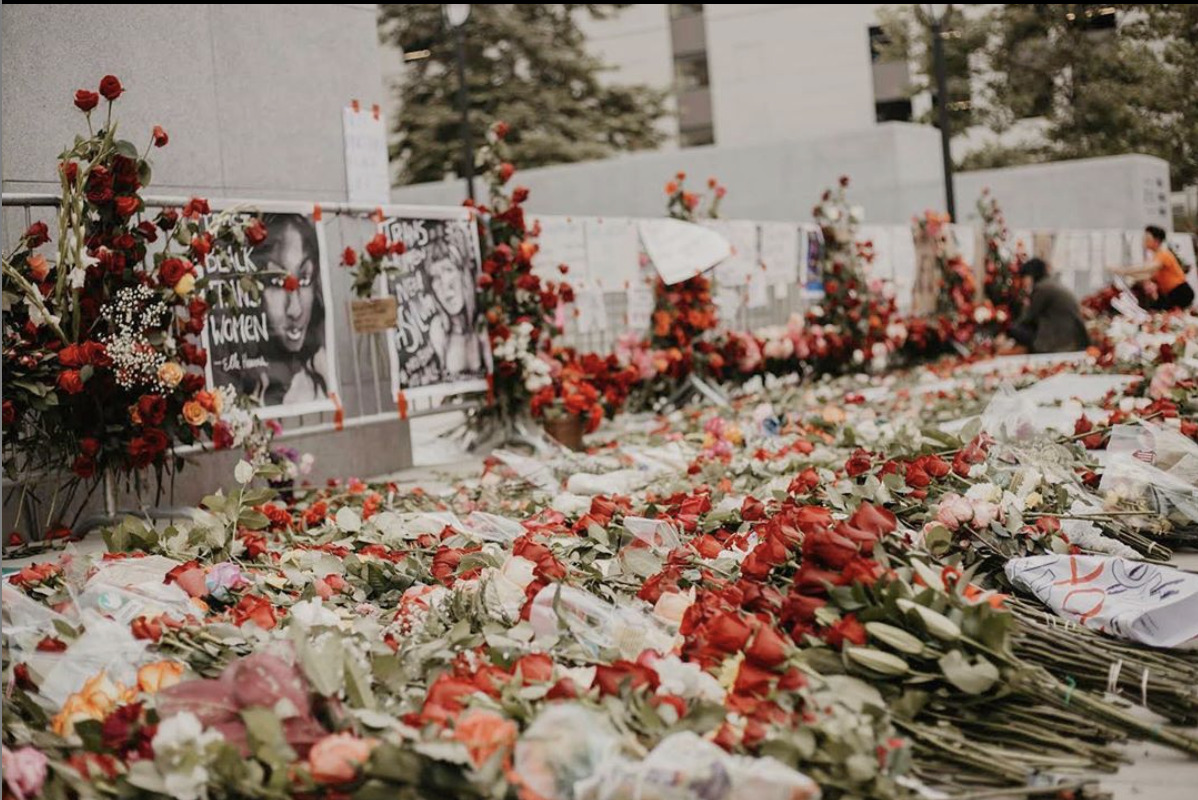 This photo by Sarah Miller illustrates a vigil organized by Justice LA to honor the 12,000 people caged in Los Angeles jails and the 877 people murdered by law enforcement in the past year. Courtesy of Justice LA. 6/05/2020 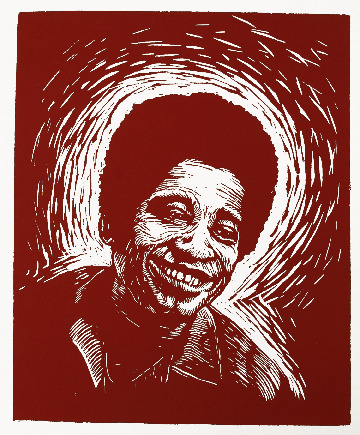 George Jackson by Mazatl. From the portfolio Voices From Outside: Artists Against the Prison Industrial Complex produced by Justseeds and Critical Resistance, 2008. Image retrieved from justseeds.org

The racist violence perpetuated by police is integrally linked to the brutality of the prison system. Incarcerated people are disproportionately Black and survivors of police terror. In California, Black men are imprisoned at 10 times the rate of white men, while Black women are imprisoned at five times the rate of white women. They too face state sponsored violence and premature death at the hands of correctional officers who abuse them with impunity. As Californians United for a Responsible Budget argues, "Prisons are essentially racist police states run by the Depart of Corrections and Rehabilitation (CDCR)." This abuse and the medical neglect, overcrowding, and dehumanization inherent in prisons make COVID-19 a deadly threat. The abolitionist movement is currently struggling to force the state to value the very lives of incarcerated people by releasing them.

The trauma of racism, the torture of solitary confinement, and the repression of dissidents cultivated resistance movements whose echoes we can see inside and outside of prison walls today. Davis asks young organizers to “consider the very long trajectory of Black struggles” in their work. We can trace back these movements through what Historian Kelly Lytle Hernández calls the “rebel archive”, made up of “secret codes, handbills, scribbled manifestos, and songs.” 1 . The perspectives of dissidents are also hidden in plain sight in newspapers and Congressional testimony. Taken together, these documents reveal the transformative power of incarcerated peoples’ struggles for liberation.

Davis traces the origins of the abolitionist movement to her comrade George Lester Jackson. 2 . As a strident Black nationalist revolutionary, Jackson galvanized the Black prison movement with his incisive analysis of how prison primarily served to oppress Black and Brown people, not to reform them or protect the public. On January 16, 1970, Jackson and two other African Americans incarcerated at Soledad State Prison, Fleeta Drumgo and John Cluchette, were falsely accused of murdering a white prison guard. The case ignited a solidarity movement for their freedom across the nation. Davis played a crucial role in the movement, leading to her own temporary incarceration. 3