Less than one month after Davis’ arrest, on November 3rd, the men incarcerated at Folsom State Prison took action for their own dignity and survival in the face of brutal conditions similar to those documented in Soledad. In one of the most inspiring yet forgotten moments in this period, more than 2400 men of all races went on a full work strike for 19 days, refusing to let what they called “the fascist concentration camps of modern America” function. They issued a manifesto and list of demands, which had originated in San Quentin’s B Block earlier that year, but had traveled to Folsom with Steve Kusami Simmons when he was forcibly transferred to quell protest movements in San Quentin. 1 . They demanded individual rights like adequate visiting conditions and medical care, and an end to unpaid “slave” labor, but also revolutionary structural changes like asylum for political prisoners and the right to organize as workers. 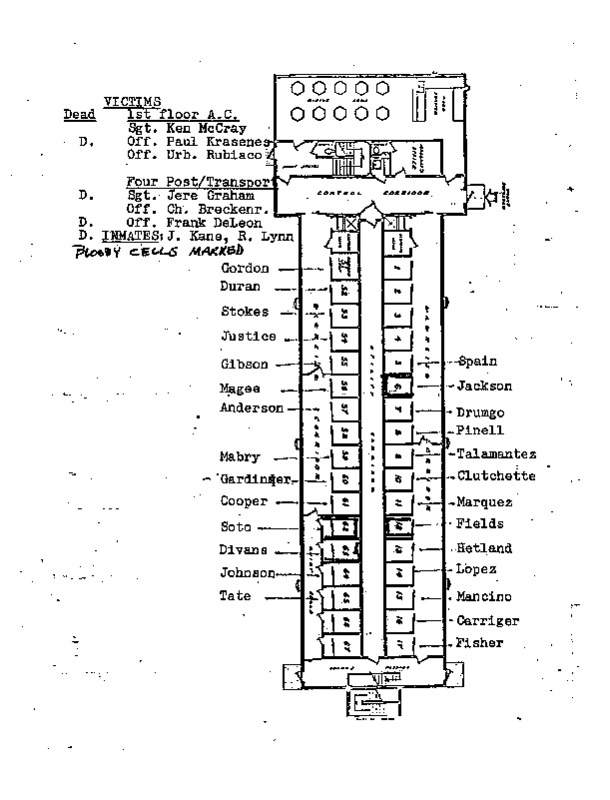 The demands would influence those famously issued during the Attica rebellion in September 1971, but the stories of the different prison actions truly converge on August 21, when George Jackson’s death, which activists called an assasination, set the tinderbox of “prison nation” ablaze.

While the exact circumstances of Jackson’s death still trouble historians, on August 21, 1971 an uprising occurred at San Quentin. While some historians claim an armed escape attempt by Jackson prompted the rebellion, many of Jackson’s supporters and his Mother argued that he was first killed, then accused of escaping in hindsight, a theory many found persuasive after years of false accusations against Black Panthers. In either case, residents of the San Quentin adjustment center gained control of the building by forcing guards to open the cells on the first floor. The men beat and ultimately killed three guards Paul Kransenes, Frank DeLeon, and later Jere Graham, and took two hostages. Two prisoners, Ronald Kanae and Johnny Lynn, were also casualties. As chaos unfolded around him, Jackson ran into the prison yard. Two guards fired, and the second bullet was deadly. They handcuffed Jackson and left his dead body splayed out on the ground for four hours. 2 . 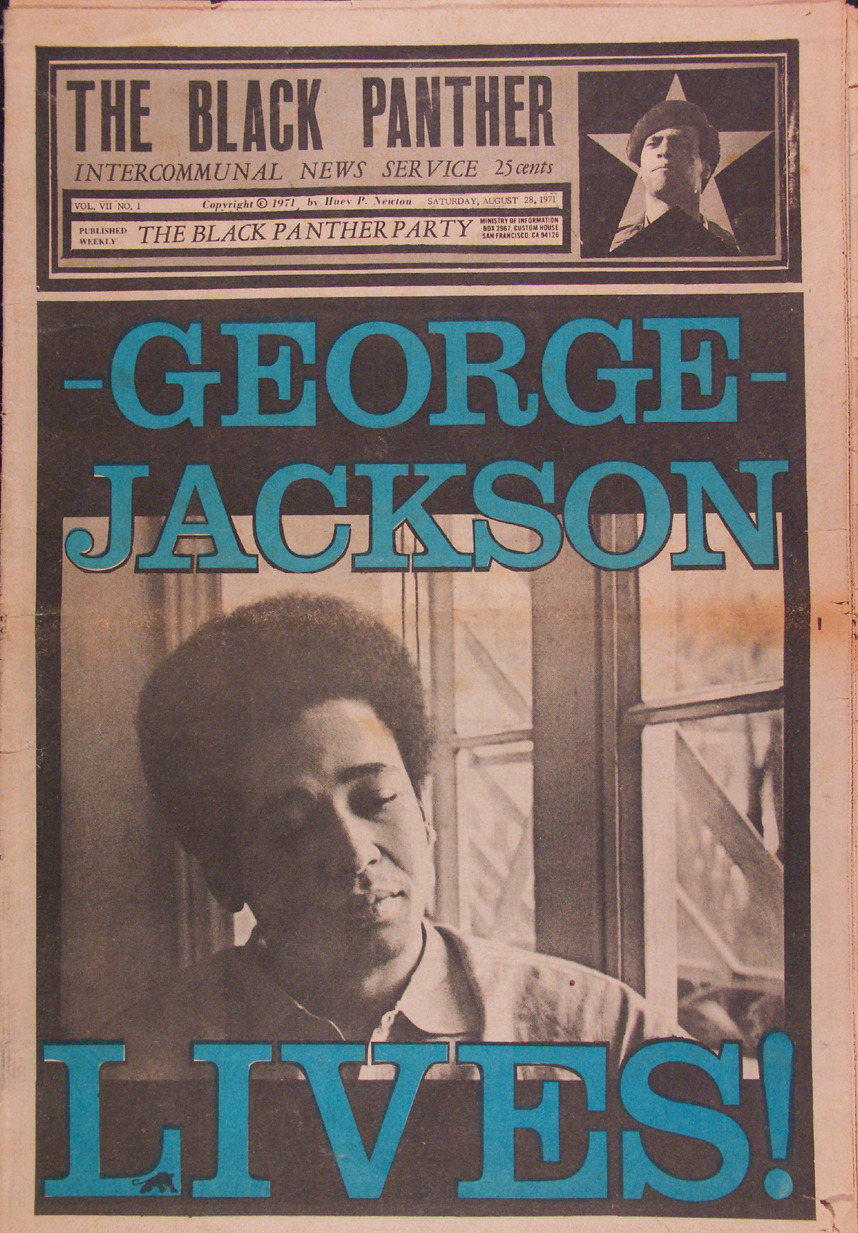 The August 28th 1971 issue of the Party’s newspaper featured a photograph of Jackson’s face with the caption “George Jackson Lives” alongside writings by Jackson. Courtesy of Marxist Internet Archive.

Thousands of Panthers and community members raised their fists at Jackson’s funeral, where Chairman Huey Newton gave a deeply emotional eulogy, emphasizing Jackson’s “love for the people.”  Panther and historian Billy X Jennings wrote of the funeral, that when he saw the “pained expressions'' of party leaders and Jackson’s family, “I then made up my mind that I would always be a revolutionary until I die. I owe it to the brothers like George and Jonathan who we have buried and also those that went to prison.”

After careful organizing politicized group of prisoners under the banner of the Attica Liberation Front (ALF) tried to address the inhuman conditions at Attica in a “democratic fashion” on July 2nd by presenting the Commissioner of Corrections and Governor Rockefeller with their demands, which were influenced by the Folsom Manifesto. After the administration responded with characteristic repression, groups like the Young Lords, Nation of Islam, Five Percenters, and Black Panthers were angry but still divided. Jackson’s death was the final straw that convinced them to form a multiracial unified front to protest conditions.

As ALF member Donald Noble recalled in the Freedom Archives audio documentary Prisons on Fire, "What really solidified things was George Jackson's death. This had a reaction on the people, one that we were trying to accomplish all along, to bring the people together." A multiracial coalition collectively expressed their grief and rage in a day of silent fasting, clothed in black armbands.

This act of peaceful resistance morphed into a total uprising on September 8th when a guard brutally beat a Black prisoner. The next morning, the men subdued four guards and locked them in cells. Soon, over 1,500 men seized control of the prison. Five days into the takeover, they called on Governor Rockefeller to negotiate, but instead he ordered state police to storm the prison. Determined to brutally punish the mostly Black and Brown men who rose up against racist conditions, the forces murdered over 30 prisoners and 9 of their hostages, in a rampage of horrific white supremacist torture and abuse. Historian Heather Ann Thompson recounts these events in striking detail, and the investigations and coverup following the uprising. 3 . More images of the rebellion can be viewed here. 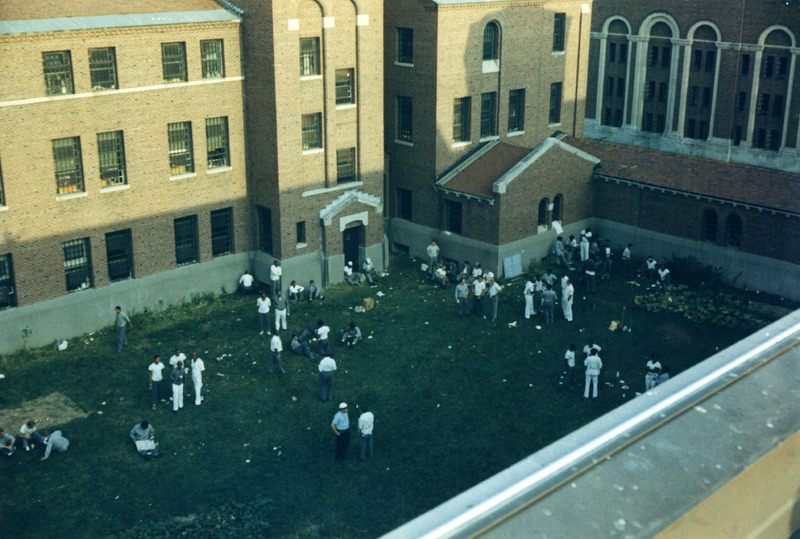